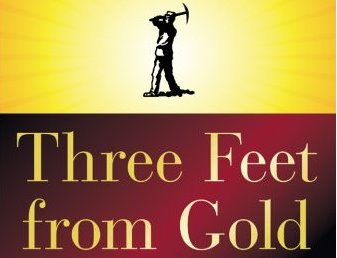 As many of you know, things happen for a reason and this story I just had to share.

Last month I was at a conference had had the pleasure of seeing a great presenter Greg Reid present. He was one of my favorites from the entire 3 day conference.

One of the things he talked about was his book, Three Feet From Gold.

Now, if you don’t know the story, it came from Napoleon Hill and is the story about a gold miner that gave up on his mine and gave everything away to the junk man only to find out that he was three feet from gold and the junk man became very rich. (Short version).

This book is essentially a sequel to Hill’s Think and Grow Rich. Which many will say is the best book ever written on success. I personally recommend reading it once a year as you will always get more out of it each time.

Funny thing is that less than two weeks later, I met the other author Sharon Lechter. Talk about “a hint”.

The book was already on my buy list but this told me that it was time to gt it NOW.

This book really hit a chord with me.

It’s about the power of persistence

So many people give up JUST before they are about to hit gold. In business, in life, in anything.

We know that success isn’t a free ride. We know that persistence and determination will drive you through the bad days.

Look at the most successful people in the last 100 years. You’ll see that all had to overcome huge setbacks and obstacles in their lives.